Please find this information on our Forums!

Next Class Begins in January of 2023
Applications received after mid-July will be considered for Class 63 review. Responses will be mailed out right before the class begins. 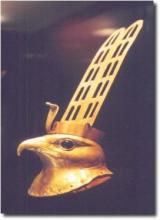 (Har-wer; G/R Haroeris) - "Great Heru/Heru the Elder" Heru in His most abstract, "original" form is known as a hawk, primarily a divinity of sky, even on Predynastic pottery and other objects. The hawk of Her-wer came to be associated with the kingship and was depicted seated atop the ruler's name in the original "serekh" (palace facade) style of hieroglyphic rendering. Her-wer is viewed as a brother, rather than son, of Wesir; His main opposite being Set, the Lord of the Red Land, and the storms in Her-wer's placid blue sky. Confusion of Her-wer's attributes with Heru-sa-Aset's led in later times to both Netjeru being intertwined; however, in His earliest depictions, Her-wer is strictly a celestial and sometimes solar divinity; only later is He associated with the kings and with the myth cycle of the Wesirian cult.