Letters to the Dead 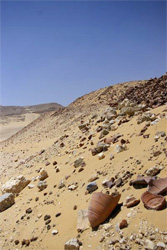 In Ancient Egypt, near the mountains in Abdju (modern day Abydos), pilgrimages would be made during certain times of the year. The people would come with pots they had made and within which they had tucked notes written out to family members who had since passed on to the Horizon. For over four thousand years these pilgrimages were made, and to this day the area is covered with thousands upon thousands of pots. It has become known to the Egyptians who are the modern descendants of these pilgrims as "Umm al Gaab" or "Mother of Pots".

Central to the beliefs of the Egyptians was the idea that one never truly died unless they were forgotten or destroyed by Am-mit ("the Dead Swallower"). To the Egyptians, anyone vindicated in the Halls of Judgment was still alive, just not physically present in the world of the sun, the land ruled by Ra.

Take a moment now to remember someone you may have seen gone to the Horizon. Remember that no matter what may have transpired between you and this person, for good or ill, that it is over now and has been left in the past. All things said and done have been accounted for in the Hall of Ma'at upon the scale against Her feather.

Reflect on this. When we, too, travel to the Blessed West, perhaps the best thing we can leave in the hearts of our descendants is also the only thing that we can give to them to assuage their grief: our love for one another.

The purpose of this site is to remember and reflect. Many of us have ancestors and friends who touched our lives and have now since passed on to the realm of Wesir, Ruler of the Blessed Dead. This is our tribute to them, our note-filled pots, our letters in the sand.

Write a letter to the Akhu

The Offering Formula for the Blessed Dead